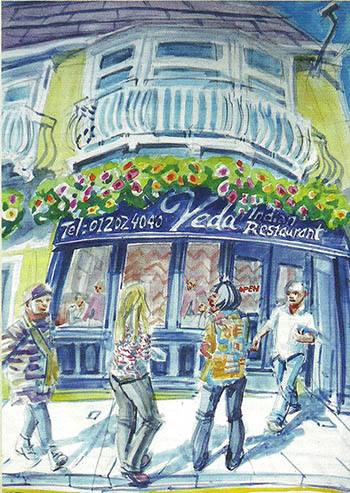 Sometimes a restaurant critic has to force herself to eat three courses say Lucinda O'Sullivan, in the interests of fairness. No compulsion was necessary at Cabinteely's latest Indian Restaurant Veda

Believe it or not, one of the hazards of being a food critic is that every time you sit down to review a restaurant you have to ‘go the distance’ with three courses, three tapas plates or whatever, otherwise you disappoint someone. When off duty, as it were, like most people we would have two courses max and maybe, if with girlfriends, two starters, but either way, when on the job, if you don’t have a pud you seem to offend half the nation!

This sprang to mind in the new Veda Indian Restaurant in Cabinteely when faced with large portions of really good Indian food. How am I going to manage a pud, I bleated to himself, and it was even more difficult as they had traditional Indian desserts, which it would have been almost negligent to skip.   I remember a few years ago dining with U.K. restaurant reviewer Matthew Fort during filming of the Great British Menu. He gobbled everything in sight including something that wasn’t great, indeed it was hard going. “How did you manage that”, I asked. “I always eat everything on the plate so they don’t know what I’m thinking.” He replied. <

Veda is owned by Krishna Kant, and both he and Veda’s chef trained originally with the prestigious Taj Group in India. Kant has been in Ireland for some ten years, working originally in Galway and, more recently, with the Radisson St. Helen’s Hotel in Stillorgan, before deciding to open his own restaurant. Veda also adds a new dimension to what has become somewhat of a restaurant village in the past couple of years.  The décor is simple and informal with purple and olive walls, a counter to the rear of the room, wooden tables, Indian music, very welcoming service and relatively modest prices.

Starters €5.95 - €9.95 included Achari duck Tikka served with mix fruit chaat, whilst Ajwani fish Tikka involves carom seed, citrus juice, and tandoori spice. I kicked off with Bharrwan Aloo (€5.95); a potato ‘barrel’ hollowed out and stuffed with Paneer, raisins, cashew nut and pomegranate seeds. Chargrilled to finish it off, it was then sliced, like a Hasselback potato, not quite fully through, to hold its shape.   Kabuli kebab (€7.50) for himself had three moist and succulent lamb rolls, which had been mixed through with a good blend of cashew nuts, ginger, garlic and chilli paste. Both were served with little blobs of sauce, tamarind, chilli, and a salsa type dice of onion, cucumber and tomato.

Mains €11.50 - €17.50 offered one section of ‘All Time Favourites’ from Rogan Josh to Vindaloo, whilst ‘From the Kitchen’ included Goan Fish Curry, Jhinga Garlic Chilli Masala, Malai Kofta, Chicken Makhanwala and many more delicious sounding dishes.   I was well pleased with my choice of Tashtari e Kebab (€15.95) from the clay oven which was a generous selection of tandoori prawn, Murgh (chicken) Tikka, Ajwani fish Tikka, and Kabuli Kebab, scattered with sautéed onions, herbs and more decorative embellishments of the sauces.   Himself too was more than pleased with his big bowl of excellent Lal Mirch Masala chicken (€13.95) and Pulao Rice (€3). However good they were, the real star of the show for me, and displayed what they can do here, was a side dish of Bagara Bhindi (€5.50) - perfectly judged panfried fresh okra retaining its firmness, tomatoes, onions, and roast pepper with a “five seed tempering”. Ace.

So to their Mithai Gharse….Sweet Selection. I really liked that, along with a selection of icecreams, they had three traditional Indian desserts – Gulam Jamun - addictive deep fried dumplings in a sugar syrup; Kheer – saffron and cardamom flavoured milk with Basmati rice topped with almond and pistachio slivers and my choice of Ras Malai (€5.50), light creamy dumplings of cottage cheese and Kyoya (a reduced milk) which were soothing and refreshing after all the spices.  With two glasses of Domaines Felines Jourdan Piquepoul (€7.50 ea) for me and two glasses of Fuente del Ritmo Tempranillo (€7 ea) for Himself, our bill with optional service was €96.35.

FIRST PUBLISHED IN THE SUNDAY INDEPENDENT ON 6TH OCTOBER 2013

This website uses cookies to improve your experience while you navigate through the website. Out of these, the cookies that are categorized as necessary are stored on your browser as they are essential for the working of basic functionalities of the website. We also use third-party cookies that help us analyze and understand how you use this website. These cookies will be stored in your browser only with your consent. You also have the option to opt-out of these cookies. But opting out of some of these cookies may affect your browsing experience.
Necessary Always Enabled

Any cookies that may not be particularly necessary for the website to function and is used specifically to collect user personal data via analytics, ads, other embedded contents are termed as non-necessary cookies. It is mandatory to procure user consent prior to running these cookies on your website.